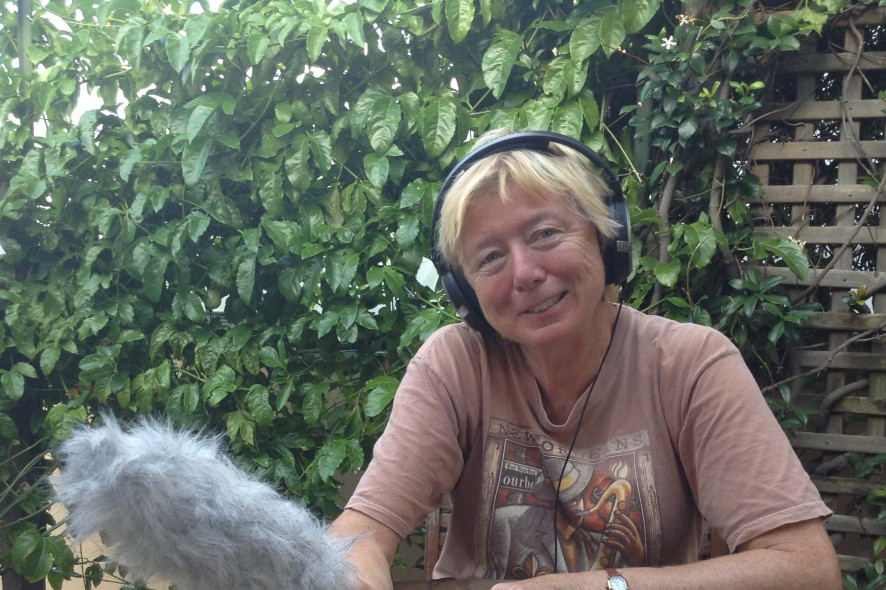 I have now spent half my life in Ireland and the other half in Australia, so it was a particular pleasure for me as an oral historian, to commune with people whose lives also oscillated between those twin poles. Ten of the 12 interviews in this project were with Irish-born associates of the INA, but I began with Colleen Burke, whose working-class origins in Bondi reveal a classic Irish-Australian family, feisty and public-spirited. Colleen left school at fifteen and became a typist, but through grit and talent, ended up as a mature age university student, celebrated poet, community activist and pioneering feminist.  With her husband, the colourful folksinger Declan Affley, Colleen was a stalwart presence at key cultural and political occasions from the 1960s, from impromptu sessions at the Gaelic Club to marches in support of the hunger strikers of 1981. Also at those marches was Eugene McCague, a builder from Monaghan, who recalls the liminal existence of a childhood spent technically in the Republic of Ireland, but psychologically never far removed from the turmoil across the border.

Denis Foley, from Kerry grew up in an era more concerned with economics than politics. His father supported the family during World War Two as a tailor in London, and Denis headed to England himself once he had a trade as a carpenter. He tells a riotous tale of landing off the ship in New Zealand, debonair in a colourful shirt and Panama hat, and being hired straight off. A born raconteur, Denis describes in rich detail his adventures on various construction projects, and his notable role in GAA football, where some of the best stories involve what happened off the pitch!

Another superb raconteur is Maurice O’Sullivan, or as he is known at home in Cork, Muiris O Súilleabháin.  This native Irish speaker, a polymath of passion and humour, has been a significant public figure and trade unionist for decades. Maurie’s love of politics and Gaelic culture is well known; he also speaks movingly of his decades of advocacy on behalf of victims of domestic violence and child abuse.

Another noted Gaelgóir is Tomás De Bháldraithe, whose father and namesake compiled the first comprehensive Irish-English dictionary. Tomás has long run Irish classes at the INA and attended the Gaelic Summer School.  Originally from Dublin, he had many esoteric adventures, including a sojourn in Norway, before he migrated to Australia in the ‘80s. While celebrating the Irish language and missing his beloved Connemara, Tomas welcomes the signs of a more progressive, multicultural Ireland that he sees on frequent visits home.

Three of the interviewees had strong associations with the Catholic Church. Father Mícheál O Súilleabháin, from Cork, came to Australia in his twenties, and has been strongly associated with the imposing Celtic Monument in Waverly Cemetery, having celebrated countless Easter Sunday Masses there and written about its fascinating history. In latter years he has taken up Irish dancing and sailing, and he also tells a great story about being present at his own Requiem Mass (a case of mistaken identity).

Tom Power speaks eloquently of growing up on the family farm in Tipperary and feeling the first stirrings of a priestly vocation. He spent many years in the priesthood, and doing pastoral work in prisons, before eventually becoming a layman and marrying Trish, his wife of over forty years. He is a towering figure in the Irish -Australian community, due mainly to the extraordinary campaign he presided over to raise funds for what would become the Memorial to the Great Irish Famine, a powerful sculpture and installation in the Hyde Park Barracks, Sydney, where many of the 4,000 or so orphan girls sent out from Ireland between 1848-’50 stayed. Tom recalls the lengthy process is microscopic detail, infused with humour and insight.

Bishop David Cremin, from Limerick, has been a popular figure in the Irish-Australian community for decades. He traverses the highlights of his time here, including his celebration of a controversial Requiem Mass for the hunger striker Bobby Sands in St Mary’s Cathedral, and does not shy away from the lowlights, which include the appalling child abuse scandals that have engulfed the Catholic Church here and overseas in recent decades.

It wouldn’t be an Irish community history without at least one good pub and the avuncular INA volunteer lawyer Tony Baine, whose family owned the renowned Dolphin Hotel in Surry Hills, provides a raft of great anecdotes about its days as a boardinghouse and gathering place. He even sings!

The INA as an institution is covered in splendid detail by office bearers Michael Boland, a former President, and Liam O’Mahony, a Corkman who has given many decades of service and is still an active committee member. Finally, radio broadcaster Michael Lyons recalls the ups and downs of his active involvement with the Irish-Australian community from the streets of Lakemba to the corridors of St Vincent’s Hospital, where he is a compassionate pastoral care giver. It’s been a long journey from a two-roomed cottage in a mining village in Tipperary, where he grew up with an unusual Irish Labour Party political tradition, to his comfortable Lugarno home, and his occupational history, from recalcitrant soldier (he quit the Irish army because he didn’t like taking orders) to car salesman, is a colourful one.

There is much to savour in the testimonies of these diverse Irish-Australians. If there is one thing that unites them, it’s a love of Irish culture and an affection for our stubborn loyalty to the land we, or our ancestors, sprang from.  Listen, laugh, cry and learn.

As a teenager in Canberra in the mid-90s I first learned my music in the context of a very settled Australian Irish music scene. Almost all the people I learned from were Australian-born, often from non-Irish backgrounds, and had become involved in the music through the 70s/80s folk revival. They learned a large part of their music from Irish recordings, and in the age of easy air travel there was an expectation that they would do a “pilgrimage” to Ireland to absorb the music first-hand. Politically, if anything, playing the music was a facet of a wider multi-cultural music scene that revolved around the many folk festivals scattered around Australia.

By contrast, listening to Pat McGrath and Jimmy Mullarkey you get a real sense of how much the music meant to the Irish immigrant community during the major wave of Irish immigration in the 1950s-1970s. The music provided a tangible link home for a group who rarely got the chance to travel back.

I found it interesting that, though he grew up around traditional music, Pat had never heard Irish tunes played on the harmonica before. Even so, when he fell in love with the instrument and learned to play, Irish music was what he was drawn to. He forged his unique approach to the instrument in the thriving Sydney Irish music scene of the 1960s, and his melodeon-like style (with driving ‘vamping’ accompaniment) was a real revelation.

Irish politics seemed to simmer very near the surface in a way that you really don’t see in the modern Australian Irish music scene. To many the tunes connected to a republican politics that was still very raw, and Jim Tierney also highlighted the strong influence that the catholic church played in politics of the Irish-Australian community. His visceral, religious-based objection to communism, and its influence on the union movement, came up again and again in his interview.

Interestingly, the two dance-based interviews were with Australian-born teachers who still maintained strong familial links to their Irish heritage. Trish McGrath highlighted how much of a social hub the Gaelic Club was back in the 1960s, and it was there that she got her first exposure to the Irish Céilí/ Set dancing that would go on to be a major part of her life. With the modern proliferation of Irish-themed pubs we tend to forget how vital and unique the social aspect of the club was for the Irish community not so long ago.

Maureen Whelan’s interview provided a fascinating look at the changes that have taken place in the fast-moving Australian Irish Step-Dancing scene. Her early memories of Sydney St Patrick’s day celebrations provided a rare glimpse into the Irish music that was played prior to the 1960s, and I was particularly taken with how she described the physicality of the playing of Frank Heffernan and Billy Crowe, two towering figures in Sydney Irish music in the early-to-mid 20th Century.

I feel greatly privileged to have had the chance to interview these wonderful tradition-bearers. Through their stories I feel more than ever that the current Sydney Irish music and dance scene is the continuation of a long, proud and uniquely Irish-Australian tradition.